Hydrogen is the most abundant and renewable source of energy available, and is the most important component of any oxy-fuel application.  The burning of hydrogen and oxygen results in only two by-products: energy release in the form of heat and water (H2O).  If you separate water into hydrogen and oxygen, then re-combine it by burning, the result is water, making it a truly “green” energy source. 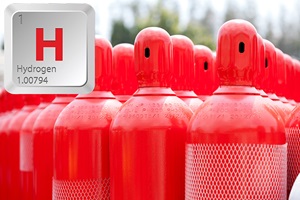 Despite hydrogen’s abundance, it takes a tremendous amount of energy to separate water into hydrogen and oxygen to make its energy competitive with other fuel gases, so its price is not reflective of its availability.

The use of oxy-hydrogen fuels is not new to the metal forming industry.  In the past hydrogen was the fuel of choice for things like underwater cutting and special welding applications such as welding aluminum or lead.  Currently oxy-hydrogen is still used when a flame devoid of contaminants – such as the carbon emitted from the combustion of ordinary hydrocarbon fuels - is needed.  Forming laboratory glass, polishing acrylic glass, and melting precious metals are common uses of oxy-hydrogen flames today.

Harris recommends using equal pressure acetylene-oxygen equipment for oxy-hydrogen applications with one exception: a regulator with a 350 CGA on a hydrogen cylinder is needed.  A 350 is generally for high pressure fuel gases (>500 psig) versus the more common CGA 510 connection meant only for low pressure fuel gas cylinders.  Even though hydrogen is much thinner than acetylene gas and it requires using a very different oxy-fuel ratio, the result is a hot, clean, stable flame when setting the correct gas pressure.  Refer to the Harris Acetylene Tip Chart to set the correct gas pressure, and be sure to use the correct mixer and tube / tip combination for your application.

When lighting an oxy-hydrogen flame, it is pale with virtually no color.  This is due to the fact that there is virtually no carbon present, which differs from a traditional hydrocarbon fuel flame.  The oxy-hydrogen flame will be difficult to see in daylight or in a brightly lit room, so extra caution is needed – not much is more dangerous than a flame that cannot be seen.

Aside from visibility and cost, another drawback to using hydrogen as an alternate fuel is it has a greater tendency to leak.  This is due to the fact that it is the thinnest substance available and it can be difficult to contain if not managed properly.  Always check for leaks twice before lighting any flame.